For the ten months before I departed last year for points west I worked as a volunteer with Oldies But Goodies Cocker Spaniel Rescue, a wonderful group of people centered in and around the Greater Washington, DC area and completely devoted to rescuing animals that have, for a variety of reasons, lost their humans and then placing them through adoption into new ‘forever’ homes.

As the name of the group implies, OBG focuses it attention on Cocker Spaniels. But it also handles quite a few ‘honorary’ Cockers. OBG is far from the only rescue organization operating in the DC area but it is certainly one of the more productive, placing in a good year as many as 150 dogs into new homes. Many of them retrieved from kill shelters where, had they not been adopted within 72 hours, faced almost certain death.

These are domesticated animals bred specifically to serve as pets for humans. Pets are not toys that can, once their perceived value diminishes, be dumped on the nearest trash heap or passed on to charitable organizations. Or worse dropped at a kill shelter and three days later stuffed into a gas chamber. The yeoman work that OBG and its sister organizations around the country do to stem this tide is admirable but tides are, as you well know, unstoppable. No amount of work will ever be enough to save all these wonderful animals. Still, we try. There is no other way. We humans are all they have. It’s our responsibility, having bred them as our friends and servants and members of our family, to care for them lifelong.

I really loved working with OBG and a couple of other rescue that operate in the area. I wasn’t torn by the years-long human relationships I was leaving behind when I hit the road. I’m not much of a personal, one-on-one type anyway so I knew that keeping in touch via social networks and the like would suffice for my purposes to maintain the connections. But in the few months I’d been a volunteer with OBG I had grown more than a little fond of the dogs whose care came my way.

I fostered half a dozen and fell in love with one, YoYo. I transported dozens from shelters and vets facilities and specialized care offices and between foster homes and to weekend dog shows and at least one to a new (and hopefully) forever home. And I photographed them when I could, trying to get them to put there best face forward since many people initially select their new companions from our group and those like us on the basis of the images we place on the web. It’s not a beauty contest but it always helps to make a good first impression.

Unfortunately I couldn’t continue with this service to the animals and fulfill my agenda, so I had to leave it behind. It hurt to do that. I know I was filling a big need, especially with the long haul transports that are difficult to find volunteers to support. I am happy that I did what I could while I was here. And it was great to get back just in time for the annual Cocker Cruise fundraiser and get to reunite with a ton of dogs and a half-dozen or more of my fav volunteer friends.

Other than that I hadn’t had the opportunity to do much else until I got a call about Clancy and a request to do a shoot for him. I don’t know his full story but Clancy came in from somewhere dragging a leg broken in several places which had gone untreated long enough for the bones to begin to reknit themselves. It wasn’t a pretty sight. The vets – without whose support the rescue group would be hard-pressed to do its job – took Clancy in tow and came up with a fix that in time will have him back to near normal. (I know from personal experience with a crushed heel that near is about as far as it goes.)

It was not an inexpensive fix, even with the huge discounts we routinely receive from the vets, running several thousand dollars. OBG never hesitates to underwrite these   – and a long list of similarly complex and costly operations and treatments – and subsequently relies on fundraising to source the cost. (If you ever wondered about the adoption fees the rescues impose you’d have only to look at the healthcare costs they foot to understand the situation.)

Fundraisers require promotion. So I got the opportunity to engage with Clancy at Crosspointe Vet in Fairfax Station this morning to capture some images for a promotional campaign on his behalf. Another vol will fold these into a story and present them on the web through various channels. I think the goal is to raise the $4000 surgical and rehab fee. 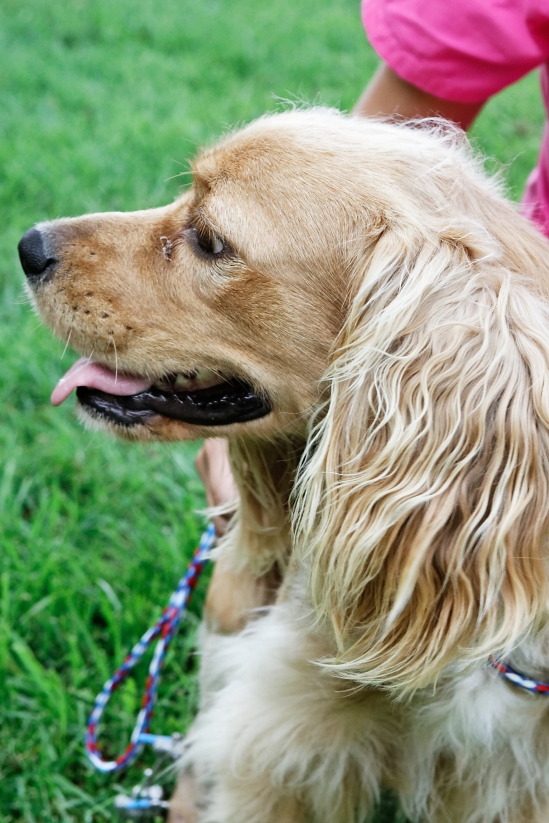 I have to say that when I walked into Crosspointe this morning I expected to find a despondent mutt whose head would need holding up for the camera. I mean, how would you feel after that experience? I could not have been further off the mark. His head did have to be held a bit – but only to slow him down for a shot. Clancy is one energetic dog who seemed to laugh at the apparatus attached to his leg to keep the bones in place while he heals. I found just looking at the thing painful but apparently Clancy is made of tougher material than I am. With help from Niza, the vet tech, we got some decent photos. It helped that Clancy is very photogenic. I also made an attempt at a video using the Canon 7D but cinematography really isn’t my game. I get another chance at that when Clancy goes for a post-op check up on the 20th. I think I’ll even get to try my hand at doing an interview with the vet. The better I do my part the greater the possibilities Clancy will find a new human to take care of soon. Humans are much more in need of this type of care than they either realize or perhaps are willing to admit.

You might have noted by now that Clancy is also one our honorary Cocker Spaniels – well, he sort of has Cocker ears. He’s a mixed breed of some origin but I think you have to grant him handsome. A very happy animal begging for affection and yearning to return the favor. September 11 is a National Day of Service in US. I am so very pleased to have gotten the chance to fulfill the pledge.

The Clancy video – uncut and unedited – may be viewed by clicking here.

The Clancy stills gallery may be reached by clicking here