I had the good fortune to become connected with the Oldies But Goodies Cocker Spaniel Rescue group a little less than a year ago and have counted that association among the myriad blessings I’ve been presented with these last few years since Ruth’s passing. Allow me to explain.

Memories and other material and immaterial possessions aside Ruth also left me the sole human-in-charge of the four dogs we included in our household – maybe it was the other way ’round: two American Eskimos (Gracie and Ruby) and two Cocker Spaniels (Corkie and Jake).  For two years we rattled around inside a house that, lacking Ruth, her company, the kids, frequent visitors and the like, had become increasingly overlarge for our needs and overbearing on my daily existence.  The one major advantage it offered  was a comfortable, fenced back yard that allowed the pups to wander at will while I was off at work but over time the emoional and financial budens this luxury imposed began to weigh rather heavily. So I began to toy with the idea of selling the house.

But where to go?

The first solution to come to mind was a large motorhome to house and transport the band. We investigated. Not a good idea. Still the movement to divest the house progressed and eventually occurred and we needed a place to hang our leashes. One of my rental condo tenants saved the day by deciding to move out and buy a house, thereby providing us with shelter in the process.

But – I concluded that the four of us (Gracie had died the previous year) would not fit into this new space and agonized over the prospect of giving up one of the animals. First off, which one? Ruby the Eskimo was the natural answer since Jake and Corkie, though not a bonded pair – far from it – were brothers; we had taken them from the same litter 5 years earlier. But when I mentioned my dilemma to our longtime housekeeper she beamed and volunteered to adopt Corkie, long her favorite.  And this allowed Jake and Ruby and I to occupy the condo on Ivystone Court.

It was comfortable and even though we all missed the backyard for slightly different reasons, there were plenty of trails to walk and we adjusted. Then the wanderlust set in and my nomad period began to emerge. I tried to include the dogs but for various reasons not the least of which was Jake vomiting about every 25 miles – it didn’t work and finding and financing dog-sitters became overwhelming. So I called upon the Eskie Rescue League to find a new home for Ruby – she moved to Long Island and then agonized over Jake. Of all the animals Jake was mine. I had selected him from the litter and spent more time with him, and vice versa – than the others. He was more than just my favorite. I didn’t know what to do.

A friend brought Oldies But Goodies Cocker Spaniel rescue to my attention and after a check of the group I contacted them. When Ruby left for Long Island I was happy for her and for her new human but the day it came for Jake to leave was near heartbreaking. I walked him out to the awaiting SUV and Lisa, the group transporter that day, and tearfully handed him over. It was pure hell; I was more or less bathed in a sense of guilt and self-loathing. Shortly thereafter I set off for what has become a veritable continuous road-trip. But I have had periods of being back in the Northern Virginia area and last December I contacted OBG and asked if I could in some manner be of service. They welcomed the inquiry and put me to work as a foster, a show handler and a transporter and over the next several months I got to take care of half a dozen dogs – including YoYo who I fell in love with – and to do photography on their behalf. That included fundraising events and the big one for me was the Annual Cocker Cruise. I got back from this latest road trip just in time to photograph this year’s cruise also and to reconnect with this energetic group of volunteers.

So, feast your eyes on a slice of what happened when 60-some Cockers and their humans assembled to cruise the Potomac from Alexandria to Georgetown and back on the 22 August.

Click on the Pic to be transported to the entire gallery. 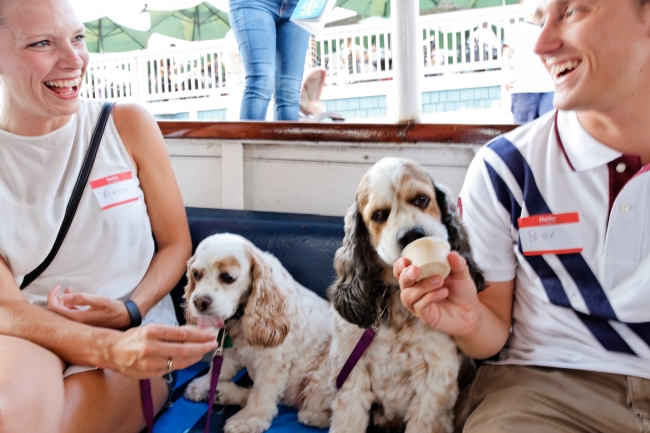