I suppose the real cause of my all night drive from Pictured Rocks National Seashore resulted from my dalliance along the Au Sable Point Trail. I had seen the Au Sable Light from a vantage point along the dunes about five miles north near Grand Marais and decided I needed to get a closer look. It’s reached by a trail located just off the north perimeter of the Lower Campground, about a mile and a half from the lighthouse, so when I finished up tramping around the dunes I drove down that way.

By the time I reached the trailhead it was 1930. I calculated the walk would require 30 minutes one way and given that I’m still way north (46 degrees) I’d have plenty of time to get out there do some photography and get back before dark. I was thinking about the Light not the sunset and relished the idea that for once I would be approaching my subject both at the right time of day and under near perfect weather. One of those rare times when my schedule coincided with the right everything.

The Lower Campground is hard by the lakeshore. I parked and proceeded up the path. It runs parallel to the and within feet of the shoreline providing a panoramic view of Lake Superior. As I trudged along it  occurred to me that in addition to the Lighthouse I might also be able to capture shots of the sunset over the lake.

I took my time at the Light and shot it from as many angles as I could. It has stood on the point since 1874 and is one of tens such lights found around the Great Lakes area. If you’re into light houses this is the place to be – much more so than on the east or west coastlines. The shots will be the subject of the next post because I was more taken – at least for now – by what followed that part of the shoot.

I finished up, working my way around a few late evening visitors who arrived in time to clutter up the view, and headed back down the trail at a quick pace. I planned on finding a spot on the beach near where I had parked the car and taking in the ending of the day.  I arrived about 2030 and looked around for a spot. It was then I also realized that I had plenty of time to run and get my tripod – always a last-minute and usually overlooked thought – as well as a lens filter that would help to cut the sun’s glare and capture more of its coloration. So I picked the items up and headed back to the beach.

I was surprised to see that just left of the place at which I entered the beach a creek was flowing into the lake at moderate to high velocity so I settled on a spot that placed its exit point between me and the sunset. The lens filter ( a variable Tiffen) allowed me to soften the sun’s rays and to slow the movement of the water. I really loved the results. 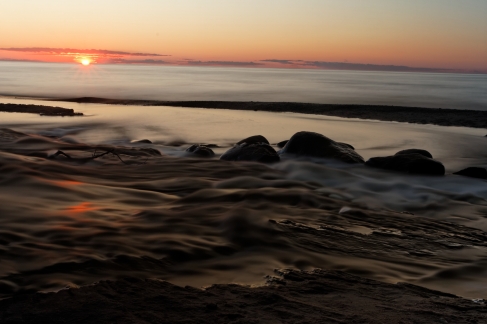